We present the case of a 71-year-old female patient with past medical history remarkable for a pancreatic head cystic lesion diagnosed in 2009. It was a 24mm multilocular cystic lesion with a central scar, that remained  asymptomatic and stable in size until 2015, when follow-up was lost.

In 2019 the patient developed new onset jaundice, choluria and acolia. An abdominal ultrasound was performed and revealed a 47x45mm heterogeneous mass in the pancreatic head, associated with de-novo common bile duct dilatation (CBD, 17mm in the liver hilum) (Fig. 1). 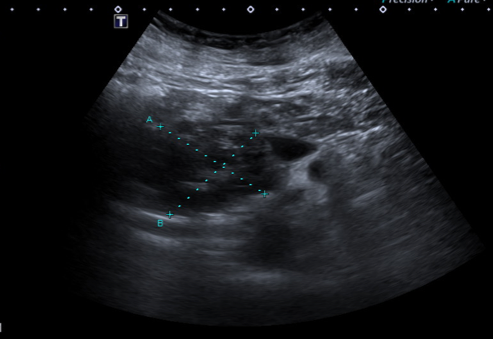 Endoscopic ultrasound (EUS) documented a predominantly microcystic lesion located in the head of the pancreas, measuring 53x46mm, with a few macrocysts and pseudo-solid areas, compressing the CBD and the superior mesenteric vein,  and without vascular invasion or Wirsung dilatation (Fig. 3). Fine needle aspiration (FNA) of the macrocyst and of a pseudo-solid area was performed. Cyst fluid biochemistry analysis revealed a high amilase level (54085 UI/L) and a normal CEA (2 ng/mL). 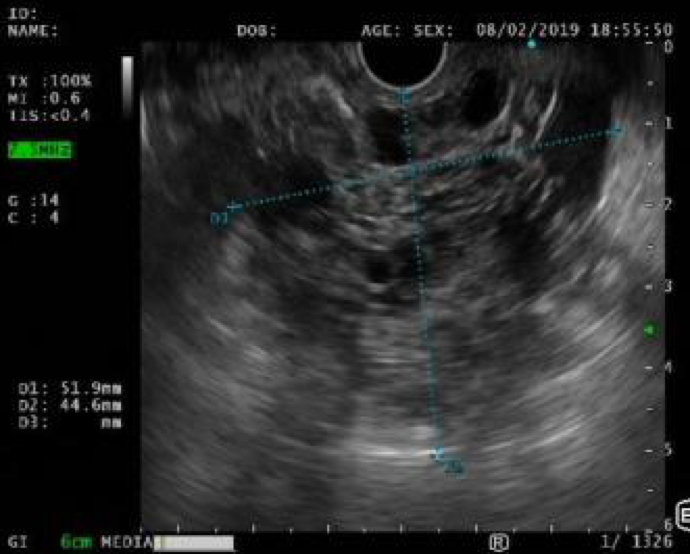 Figure 3. EUS: predominantly microcystic pancreatic lesion located in the head of the pancreas, with a few macrocysts and pseudo solid areas.

EUS-FNA cytology showed cuboidal cells, negative for CK8/18, synaptophysin and chromogranin-A, consistent with the diagnosis of a serous cystadenoma (Fig. 4).

ERCP was then performed. Pancreatography showed a multicystic lesion in the head of the pancreas and confirmed MPD communication (Fig. 5). During ERCP a plastic stent was placed for biliary drainage and jaundice resolution. 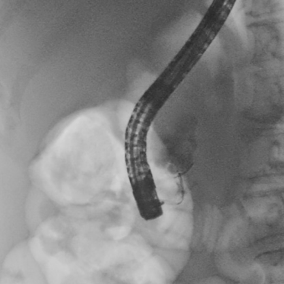 Two months after, the patient underwent surgical resection of the pancreatic head lesion (Whipple procedure) and the final pathology confirmed the diagnosis of a serous cystadenoma of the pancreas.

Serous cystic neoplasms account for 8–17% of clinically encountered pancreatic cystic lesions and are predominantly found in middle-aged women (1). These lesions are usually benign and asymptomatic and present a benign clinical course in the vast majority of the patients (2). Symptoms may occur, typically in those patients with lesions > 4 cm in size, and are often attributed to mass effect or to infiltration of adjacent structures. Abdominal pain (25%), palpable mass (10%) and jaundice (7%) are the main clinical manifestations (3). Although rare, communication with the MPD has been reported occasionally (0- 0.6%) in serous cystic neoplasm, requiring a strong suspicion, so that the misdiagnosis of an intraductal papillary mucinous neoplasm is avoided (1).