A 19-year-old female patient, with no past medical or surgical history, and no family background of cancer, was referred to our hospital due to an asymptomatic lesion in the pancreatic tail, which was identified by abdominal ultrasonography performed to investigate a mild elevation of alanine transaminase in routine lab tests. The subsequent computed tomography (CT) scan showed a mixed solid and cystic heterogeneous round lesion of 36×31 mm in the posterior region of the tail of the pancreas, touching the left adrenal gland. There was no pancreatic parenchymal atrophy or dilatation of the main pancreatic duct. No ascites or metastases were observed. These findings were confirmed by magnetic resonance imaging (MRI) (Fig. 1). 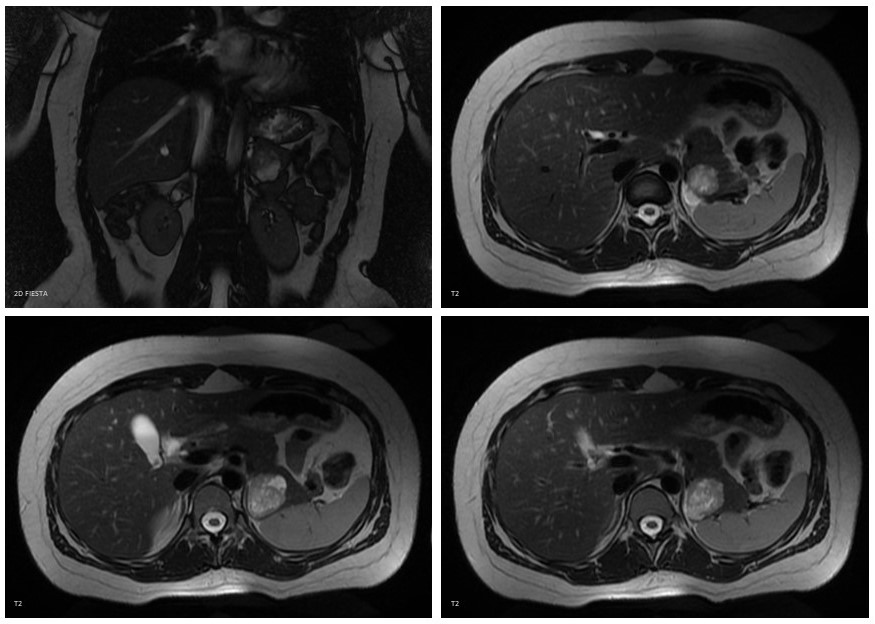 Blood tests, including CA 19-9 and CEA, were normal. The comprehensive endoscopic ultrasonography (EUS) displayed a well-demarcated heterogeneous mass with several small cystic areas, hypovascular, located in the pancreatic tail and with preserved cleavage plane with the left adrenal gland (Fig. 2). The remaining pancreas was normal. Besides a gallstone, the EUS did not reveal additional changes. EUS-guided sampling was not performed. 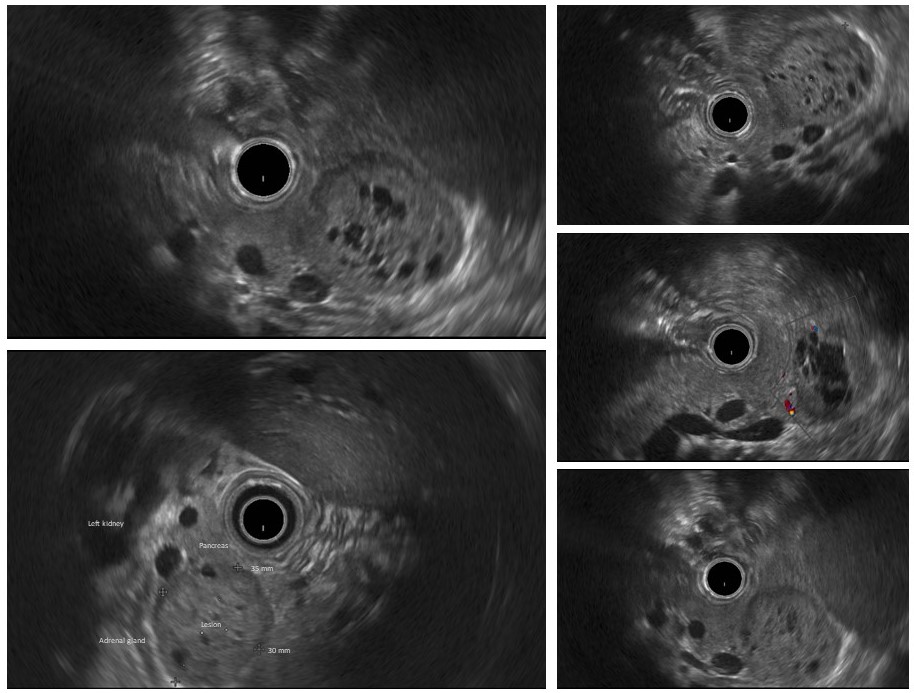 Figure 2. Endoscopic ultrasonography (EUS) appearance of the lesion: The sonographic images demonstrate a well-demarcated isoechoic/hypoechoic, solid-appearing, heterogenous mass with small anechoic, irregularly shaped lakes of fluid, located in the pancreatic tail. The lesion was hypovascular and maintained cleavage plan with the adrenal gland.

WHAT IS THE MOST LIKELY DIAGNOSIS?

After multidisciplinary team consultation, the patient underwent a distal pancreatectomy with cholecystectomy and splenic preservation. The histological examination of the resected specimen confirmed the diagnose of solid pseudopapillary neoplasm of the pancreas (pT2N0M0) (Fig. 3). 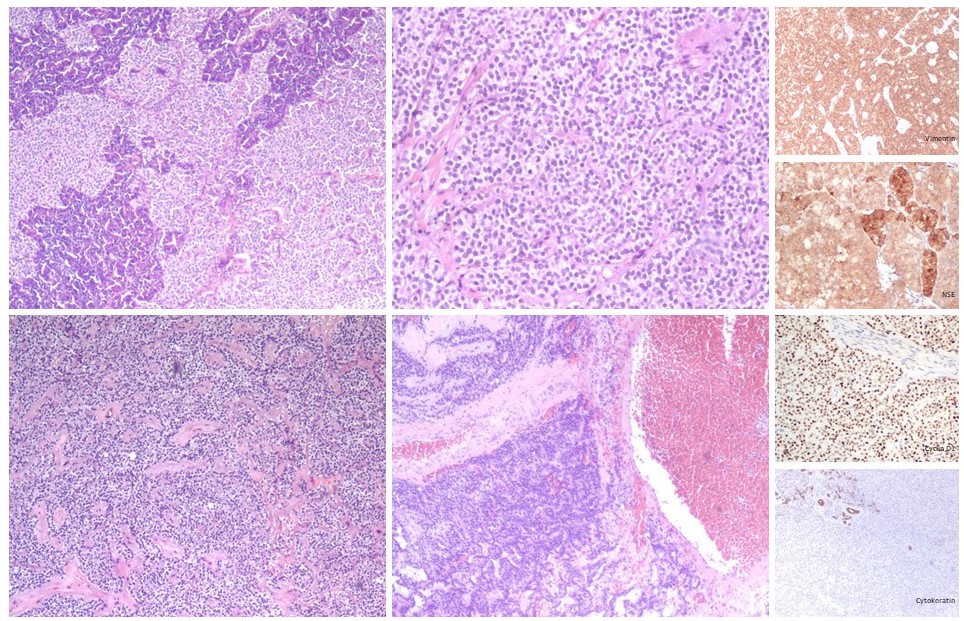 Figure 3. Histological features with immunohistochemistry of the resected specime: A mixture of solid, pseudopapillary, and hemorrhagic pseudocystic areas are observed. Uniform neoplastic tumor cells are seen separated by vascular hyalinized stroma. Tumor cells have an eosinophilic or clear cytoplasm and some hyaline globules are present. There was no perineural or vascular invasion. However, there was microscopic infiltration of the surrounding pancreatic tissue. Immunostaining was positive for vimentin, NSE, progesterone receptors, cyclin D1, CD10 and CD56 and negative for cytokeratins, chromogranin A and CEA.

Solid pseudopapillary tumors (SPTs) are rare epithelial neoplasms, which account for 1-2% of all pancreatic tumors and <10% of the pancreatic cysts. SPTs occur predominantly in women (90%) in their 20s/30s but have a wide age range, with some reports in children and older adults. Even though the most common presenting symptom is abdominal pain, at least 38% are incidental/asymptomatic (1). The majority of SPTs emerge in the body and tail of the pancreas, but they can be found in any pancreatic location. SPTs tend to be solitary and well-demarcated. They can appear solid (usually in small tumors), mixed solid and cystic, or purely cystic (larger variants). Internal or peripheral calcifications can be seen. Pancreatic duct dilatation and parenchymal atrophy are rarely found (1, 2). Although most SPTs are indolent, they have malignant potential. Preoperative differential diagnosis between benign and malignant SPTs is difficult in the absence of tumor invasion to adjacent organs or metastasis. Tumor size ≥5 cm is associated with an increased risk of malignancy. SPTs mainly metastasizes to the liver (3). After a CT or MRI, EUS with fine needle sampling has been shown to be useful for preoperative definite diagnosis. Microscopically, the characteristic branching papillae on myxoid/hyalinized stroma lined by uniform neoplastic cells combined with a consistent immunostaining is usually diagnostic (4). SPTs cyst fluid is often bloody with low CEA and low amylase (2). About 90% of SPTs harbor CTNNB1 mutation. Surgical resection is the treatment of choice for SPTs and organ preservation is advocated if feasible. Whenever possible surgical resection or debulking is also recommended in cases of locally advanced, metastatic or recurrent SPT (2, 3, 5). In our case, EUS-guided sampling was not performed because there was a high preoperative suspicion of SPT (young woman, negative family history of pancreatic malignancy and characteristic imaging findings on MRI and EUS) and concern about rupture of tumor capsule and seeding along a transgastric needle tract that would not be resected in surgery (3, 6). Overall, the 5-year survival for SPTs is over 95%, even in the presence of metastasis. Recurrence of SPTs is not uncommon after surgery (6-14%). Careful follow-up with imaging on a yearly basis after resection is recommended (2, 3, 5).