A 70-year old female without significant past medical history was referred to our Gastroenterology Department due to abdominal pain and a big heterogeneous mass of the pancreatic body and tail found on an abdominal ultrasound (Fig. 1). 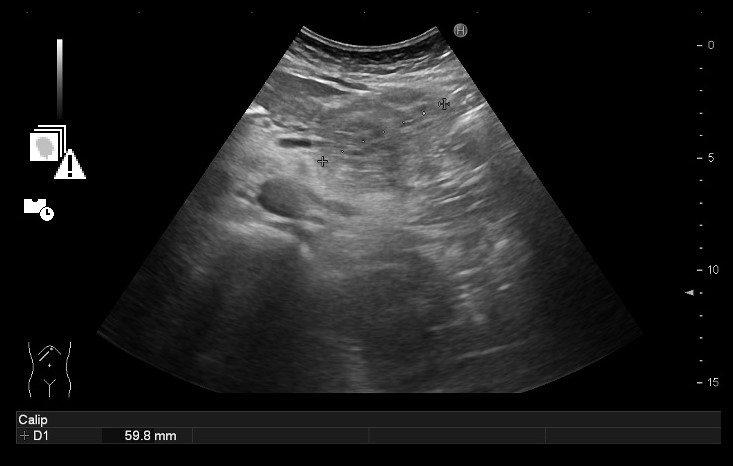 An abdominal computed tomography (CT) (Fig. 2) was performed and revealed, in the pancreatic body, a vascularized andheterogeneous mass with 66mm. Vascular locoregional structures and posterior gastric wall were slightly deformed bymass effect, however no signs of organ/vessels invasion were detected. Splenomegaly and loco-regional, retro-peritoneal and retro-crural ganglionic clusters were also described. 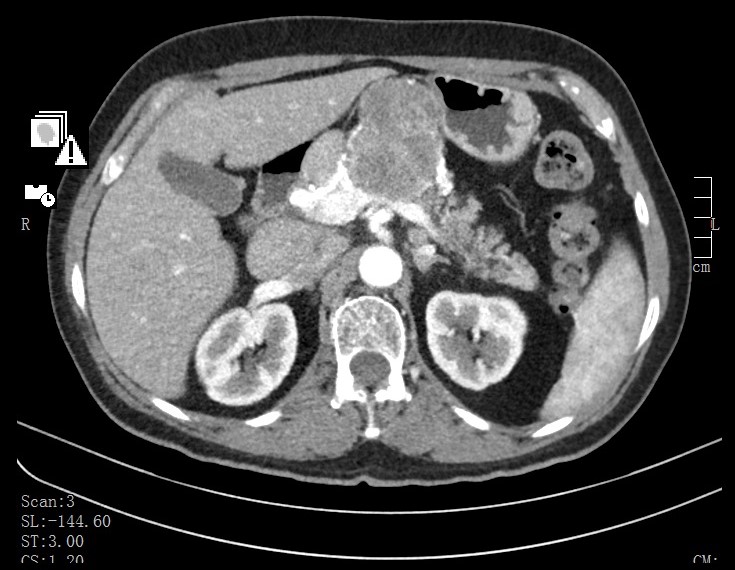 Therefore, an endoscopic ultrasonography (EUS) was performed and documented, in the pancreatic body, a roundand well delimited large mass (> 6 cm), with markedly microcystic and hypervascularized echotexture (Fig .3A). Multiple large adenopathies with heterogeneous echotexture and marked adjacent vascularization, located in various ganglion chains (including the hepatic pedicle) were identified (Fig. 3B). Cervical adenopathies and large retro-cardiac and sub-carinal adenopathic conglomerates were also visualized. A diffusely enlarged spleen was also described. 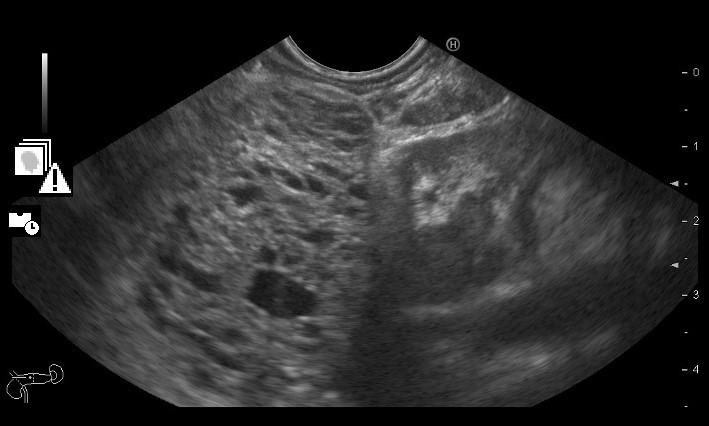 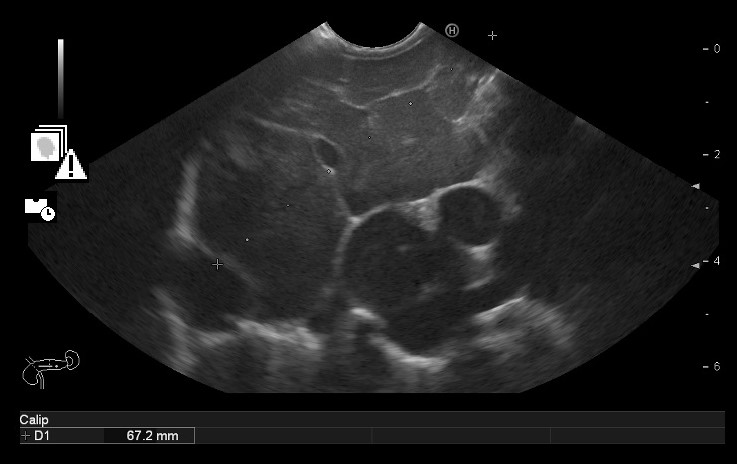 The pancreatic mass in EUS had the usual aspect of serous cystadenoma (SCA). Besides that, for better characterization of the pancreatic lesion, an abdominal magnetic resonance (MR) was performed and also found documented a multiloculated cystic mass, showing no areas of diffusion restriction, suggestive of serous pancreatic cystadenoma (Fig. 4).

Because the diagnosis was clear on CT, MR and EUS, it was decided not to puncture the pancreatic lesion.Instead, we performed a EUS-guided fine-needle aspiration (FNA) of one of the adenopathies (22G, Aquire needle) for cytohistology. The histology revealed a non-necrotizing granulomatous lesion, suggestive of sarcoidosis. Besides, our patient had very high serum angiotensin converting enzyme levels and chest CT scan revealed multiple mediastinal adenopathies and bronchial reticulomicronodular interstitial thickening.Thus, we were faced with an inicial suspicion of pancreatic adenocarcinoma, which was actually a large serous cystadenoma in a patient with sarcoidosis (which was found incidentally).

Our patient was referred to the Pulmonary Medicine Department and for now she is under treatment for sarcoidosis. Because this SCA may require resection in the future (since it is a large SCA, withslightly mass effectand associated with abdominal pain episodes), she will be kept under surveillance by the Gastroenterology Department.

SCAs constitute approximately 16-30% of all cystic pancreatic lesions, and usually occur in females. Classically, SCAs have been described as multiloculated cystic masses with a central stellate scar and calcifications. Morphologically, SCAs can be classified as microcystic, honeycomb, oligocystic, and solid pattern. CT is the first line modality of choice for characterization of SCA. MR, EUS and, in some cases, fluid aspiration may be helpful in differentiating it from other mimickers. SCAs are considered to be benign, with no malignant potential and thus these are usually managed conservatively. Resection is reserved for symptomatic patients (1-2).

Sarcoidosis is a systemic granulomatous disease, predominantly affecting the lungs, mediastinal lymphatic system, skin and eyes. Diagnosis relies on three criteria: a compatible clinical and radiologic presentation; pathologic evidence of noncaseating granulomas, and exclusion of other diseases with similar findings. An early and accurate diagnosis of sarcoidosis remains challenging, because initial presentations may vary and many patients are asymptomatic. The optimal treatment for sarcoidosis remains unclear, but corticosteroid therapy has been the mainstay of therapy for those with symptoms, progressive pulmonary disease or serious extrapulmonary disease (3-4).

After all, our patient was a lucky one. Instead of a tragic diagnosis, she actually had two different benign diseases.