Figure 1. Abdominopelvic CT (axial and coronal view): a 14-cm enhanced heterogeneous intra-abdominal mass, with cystic areas, in contact with the posterior wall of the gastric fundus.

Endoscopic ultrasound (EUS) was performed and showed a giant well-defined rounded hypoechogenic mass, without cleavage plane between the mass and the gastric wall. This was a very heterogeneous mass, with anechoic areas, suggestive of cystic transformation. Its size exceeded the endoscopic field (Figure 2-4). 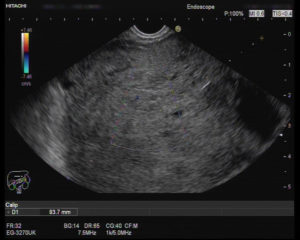 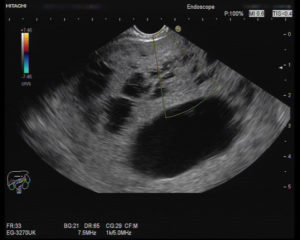 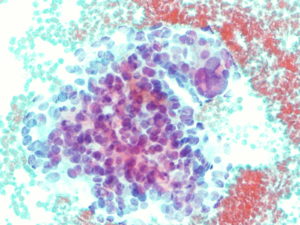 Toward these findings, 24-hour urine fractionated metanephrines were measured and were elevated (normetanephrine 5832pg/mL and metanephrine 11738pg/mL) and a 123I-meta-iodobenzylguanidine Single Photon Emission Computed Tomography (123I-MIBG SPECT/TC) was performed and  revealed an intense radioisotope uptake from the retroperitoneal mass, with a central photopenic area suggestive of necrosis, indicative of a tumor originated from the embryonic neural crest tissue, without evidence of metastasis (Figure 6).

Patient went surgical resection and histology revealed an encapsulated 16x16x10-cm tumor, weighing 1363mg, with a trabecular pattern of cells within a prominent vascular network, round and oval cells and giant multinucleated cells with abundant granular eosinophilic cytoplasm, without vascular invasion. Immunohistochemistry was positive for chromogranin and synaptophysin and focally positive for S100; Ki67<15%. The final diagnosis was secretory retroperitoneal paraganglioma.

Paragangliomas are rare neuroendocrine tumours arising from the neural crest tissue that develops into sympathetic and parasympathetic paraganglia throughout the body1. Extra-adrenal paragangliomas account for only 10 to 15% of all paragangliomas, with the intra-abdominal cavity being the most common site of extra-adrenal occurrence1. Functional paragangliomas have shown to secrete norepinephrine and nor-metanephrine resulting in clinical manifestations such as fluctuating or episodic hypertension, headache, and sweating1. On abdominal CT, there are no unique imaging characteristics specific for paragangliomas; consequently, these tumors may be mistaken for other primary epithelial or mesenchymal abdominal tumors. Advancement in the clinical application and use of EUS in recent years has transformed the field of gastroenterology, with the ability to identify and manage a wide variety of disorders, even extending beyond the gastrointestinal tract. Beyond ultrasound characterization, EUS allows guided biopsies, providing “core” specimens that preserve tissue architecture for histological diagnosis and immunostaining.

Here, we report a case of retroperitoneal mass successfully diagnosed as a paraganglioma using EUS-FNB without any complications. As illustrated by the present case, paraganglioma should be included in the differential diagnosis of a retroperitoneal mass at EUS, particularly if the mass is cystic, despite its rarity2. Nevertheless, careful should be taken when a needle puncture of a suspected functioning paraganglioma is performed, since catecholamine may be release triggering and adrenergic crisis2,3. Due to the malignant potential of paragangliomas, surgical excision is the preferred management1.