A 26-year-old male with history of sleeve gastrectomy (4 years ago) was referred to the Gastroenterology outpatient clinic due to abdominal discomfort. On physical examination a hard, nontender, large abdominal mass was found.

Abdominal CT scan revealed a 210×117 mm contrast-enhanced solid mass centered in the mesentery (Fig. 1a and 1b). There were no signs of bowel obstruction or evidence of lymphadenopathy. 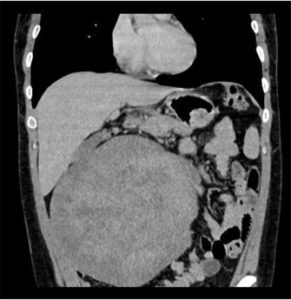 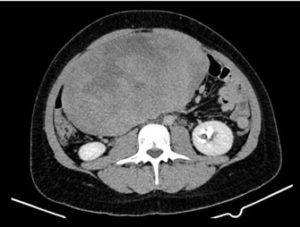 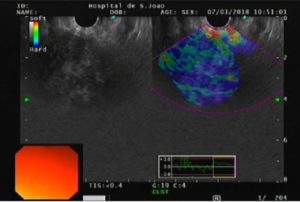 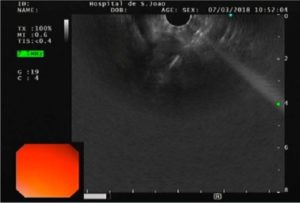 The histology specimen showed the presence of fusiform cells, without atypia (Fig. 3a and 3b). Imunohistochemical staining was positive for β-catenin (Fig. 3c) and negative for c-KIT, DOG-1, AE1/AE3, CD34, S100 protein, alfa-actin and MDM2. 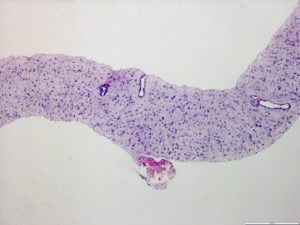 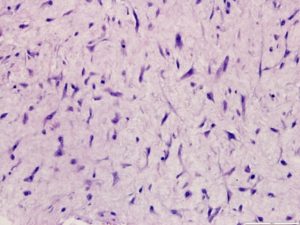 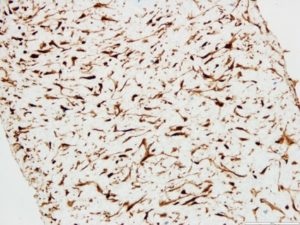 Figure 3.  Patholohy: a and b – Presence of fusiform cells, without atypia (4x and 20x, respectively); c – imunohistochemical staining was positive for β-catenin (20x).

The patient underwent surgical resection of the tumor that included segmental enterectomy because of adhesions.

The surgical specimen pathology report confirmed the diagnosis of desmoid tumor with invasion of the small bowel wall.

Desmoid tumors are locally aggressive tumors with no known potential for metastasis. Despite being histologically benign, they are locally infiltrative and can cause death through destruction of adjacent vital structures and organs. [1, 2]

Desmoid tumors have been associated with episodes of antecedent trauma, such as previous abdominal surgery. [3, 4]

Emerging evidence implicates dysregulated wound healing in the pathogenesis of these fibroblastic lesions, with the involvement of the APC gene and β-catenin (both components of the Wnt signaling pathway). [5]

Definitive diagnosis of a desmoid tumor is only performed by histological examination (aided by immunohistochemistry).[9]In the hands of experienced pathologists, tissue from a core biopsy may be sufficient to make a diagnosis. For this reason, EUS-FNB plays a key role in the pre-operative diagnosis of this type of lesion. [10]