A 70-years-old man presented with weight loss. He reported heavy smoking and consumption of 2 units of alcohol per day.

A thoracic and abdominal computed tomography was performed and revealed cephalic pancreatic enlargement with multiple calcifications scattered throughout the pancreas, a hypodense mass in the uncinated process and irregularly dilated main pancreatic duct.

Endoscopic ultrasound showed multiple diffuse infracentimetric pancreatic cysts, most of which with small foci of mural calcification, communicating with the main pancreatic duct, two larger cysts with 20mm and 19mm in the head and uncinated process, respectively, with calcifiedmural nodules, and main pancreatic duct dilatation in the cephalic pancreas (max 4.6mm) (Figure 1) 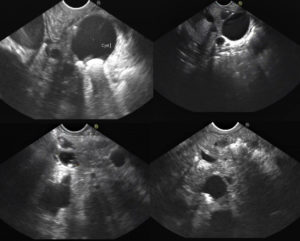 Although relatively rare, cystic lesions of the pancreas are considered to be an increasingly important category with a spectrum of histology and malignant potential1.