A 73-year-old man was admitted in the Emergency Department for abdominal pain. His past medical history was relevant for ischemic cardiopathy, ischemic cerebrovascular disease, arterial hypertension, dyslipidemia and type 2 diabetes.

He referred a 4-week history of pain in the left hypochondrium radiating to the left shoulder, asthenia and significant weight loss. Laboratory analysis revealed a microcytic anemia. During the diagnostic workup a giant mass in the left flank was observed. The patient was first submitted to a magnetic resonance imaging that revealed a heterogeneous solid lesion, measuring 11x7cm, next to the left diaphragmatic cupula and contacting the left adrenal gland, the stomach and the spleen. For better characterization and to allow tissue sampling an endoscopic ultrasound (EUS) was performed and showed a heterogeneous nodular lesion, with cystic component, measuring 94mm of longitudinal axis, and apparently originating from the left diaphragmatic cupula was identified (Figure 1, A-D). A small lesion with these same characteristics was also identified in the spleen, although with few cystic areas (Figure 2) and with an apparent cleavage plane with the bigger one (Figure 1D). Two EUS guided fine-needle aspiration procedures were executed, one in each lesion, with a 22-gauge needle (Figure 3). Liver and pancreatic lesions were excluded.

Figure 1. EUS – Next to the left diaphragmatic cupula, a heterogeneous nodular lesion, with cystic component (A and B), measuring 94mm of longitudinal axis (C) and 71mm in the sagittal axis, and with an apparent cleavage plane with the spleen (D), was identified. 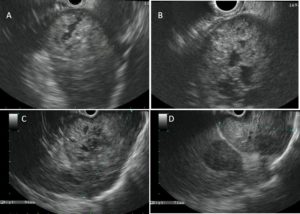 Figure 2. EUS – A heterogeneous nodular lesion, with some cystic component, measuring 37x30mm, was identified in the spleen.

Figure 3. EUS: Fine needle aspiration with a 22-gauge needle of the bigger lesion. 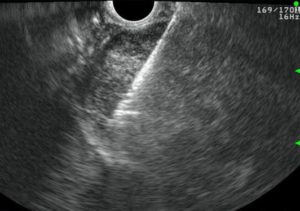 Figure 4. Pathology: Fragments of tissue with spindle proliferation organized in bundles, with occasional paranuclear vacuoles, marked cell atypia and presence of necrosis in hematoxylin-eosin amplification of 20x (A); immunostaining was positive for actin (B).

On histopathology both lesions had the same characteristics: cellblock consisting fragments of tissue with spindle proliferation organized in bundles, with occasional paranuclear vacuoles, marked cell atypia and presence of necrosis (Figure 4A). Immunostaining was positive for actin (Figure 4B). A diagnosis of mesenchymal tumor with muscular differentiation – compatible with leyomyosarcoma – was accomplished (Figure 4).

The patient was referred to surgery and the 11cm tumor located in the left diaphragm was removed as well as all organs invaded: distal pancreas, spleen, splenic colonic flexure, gastric fundus and a part of the left lower lung. The final pathological examination confirmed the initial diagnosis of a leiomyosarcoma (G3 pT2b pN0 pM1) with apparent origin in the diaphragm.

Primary neoplasms of the diaphragm are rare lesions that are often difficult to assess.1 Leiomyosarcoma of the diaphragm was first described by Kirschbaum in 1935.2 It is an exceptional entity and, to the best of our knowledge, there are only 12 cases reported in literature. As these tumors are mostly asymptomatic or occasionally present nonspecific symptoms, leiomyosarcomas of the diaphragm often grow large before they are detected, with a mean age at diagnosis of 55 years.1,3 Clinical presentation is not specific and depend on localization and volume of the tumor.1 Abdominal ultrasound and computed tomography scan rarely reveal the diaphragmatic origin of this tumor.1 On the other hand, according to Blondeel et al., magnetic resonance imaging appears to be more accurate and specific, although the definite diagnosis is established by patholohy.3,4 EUS guided fine needle aspiration has never been reported as a diagnostic tool for these type of tumors. We found it a valuable tool since it allowed diagnosis before surgery. Leiomyosarcomas metastasize by vascular embolization to the liver, the lung and to the brain and seed to the peritoneal cavity.1 Total surgical resection remains the treatment of choice and is predictive of a prolonged survival in patients with solitary leiomyosarcoma.1 The role of radiotherapy and chemotherapy is controversial in post-operative management of leiomyosarcoma.1 Radiotherapy and chemotherapy containing ifosfamide or ifosfamide and doxorubicin have been used in the treatment of patients with metastatic sarcomas with acceptable toxicity.5 Due to the rarity of cases, little is known about the long-term prognosis of these tumors.1

Submit your own US Quiz!