October 2017 – ABDOMINAL PAIN AND VOMITING: THE CONTRIBUTIVE ROLE OF ULTRASONOGRAPHY IN DIAGNOSTIC APPROACH
Home » Clinical Case Of The Month »

Figure 1 – Abdominal ultrasound showing a thickening of the bowel wall with loss of layering.

Then, a total colonoscopy was performed with no abnormalities. Abdominal ultrasound was repeated and continued to show the same findings, but a small bowel origin was admitted. Therefore, an abdominopelvic CT and CT enterography were done, but both were normal (Figure 2).

Figure 2 – Abdominopelvic CT (A) and CT enterography (B) with no abnormalities.

A few months after the onset of symptoms, the patient had clinical worsening with weigh loss (>10%) requiring hospital admission to parenteral nutrition. Despite a normal analytical study, abdominal ultrasound continued to show a small bowel thickening (0.88 cm in thickness), loss of wall lawering and additionally, several local lymphadenopathies and mild interloop ascites (Figure 3). 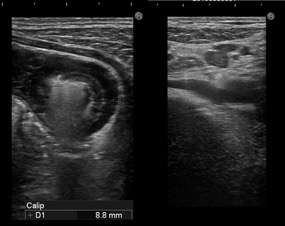 Thus, it was decided to perform a PillCam® SB 3 video capsule endoscopy with complete small bowel examination, showing a transposable stricture through the capsule with almost circumferential erythematous and erosive mucosa of a short segment of distal duodenum/proximal jejunum (Video).

Double balloon enteroscopy revealed a mild transposable stricture with circumferential erosive lesions and pearly white appearance of mucosa with 4 cm in length in the proximal jejunum and a small area with similar aspects in the distal duodenum (Figure 4). 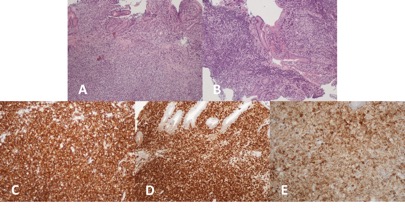 Immunophenotype suggests MALT lymphoma with loss of glandular elements by a monotonous population of small to intermediate lymphoid cells (A and B-H&E 100x). Immunohistochemistry showed intense and diffuse positivity for CD20 (C-200x) and Bcl2 (D-100x), aberrant expression for CD43 (E-200x) and negativity for CD3 and CD5 (lymphocytes T), CD10 and cyclin D1.

She underwent 8 cycles of chemotherapy with rituximab, cyclophosphamide, vincristine and prednisolone (R-CVP), becoming totally asymptomatic after the 4th cycle. No recurrence of disease was verified during the 12-month follow‐up period.

Small bowel tumors are rare and account for less than 2% of gastrointestinal neoplasia, being lymphoma responsible for 15-20% of cases, most common in the ileum (60-65%). MALT lymphoma is more common in stomach (68-75%) with well-stablished association to chronic gastritis due to Hp infection. However, it is much less frequent in the small bowel (<10%), where the association with infectious agents is not well understood. The incidence rate of this type of lymphoma is nearly equal among men and women with an average age at diagnosis of about 65 years. The presenting symptoms are related to the primary location of lymphoma. In the small bowel, symptoms are generally unspecific, although intestinal occlusion, perforation, intussusception or diarrhoea may rarely occur. At presentation, disease is usually localized and rarely infiltrates bone marrow, being disseminated in only 7% of cases. The sensitivity of CT and especially CT enterography for detecting small bowel tumors (including lymphoma) is 84.7% and a higher accuracy has been reported for these imaging exams by comparison with ultrasonography. Common features of small bowel MALT-lymphoma include multiple nodules, infiltrative form, endoexoenteric form or extraluminal mass. This case emphasizes the importance of abdominal ultrasonography in the diagnosis of small bowel pathology. A high level of suspicion was required due to the normal findings in other diagnostic imaging exams, unspecific symptoms and confounding risk factors (Hp, NSAID and personnel psychiatric history). Persistent findings on serial abdominal ultrasonography were decisive to advance to invasive procedures. Targeted bowel ultrasonography showed high diagnostic accuracy in small bowel study.