We present the case of a 69-year-old woman with past history of bilateral breast carcinoma, treated with surgery and radiotherapy in 2006 and 2012, in clinical remission for the past 4 years. She had no other recent symptoms or clinical diagnosis. Following hereditary neoplastic syndromes surveillance protocol, the patient was submitted to an upper GI endoscopy, where a small submucosal lesion of the gastric antrum was identified and the patient was subsequently scheduled for an upper GI endosonography (EUS). Cardiac examination, laboratory tests and electrocardiogram were performed and were normal. At EUS, a small lipoma in the submucosal layer of the antrum was diagnosed. At mediastinal observation, a 12mm, isoechoic mass bulging from the inter-auricular septum into the left atrium was identified. The mass had no relation with the valvar ring (Figure 1). 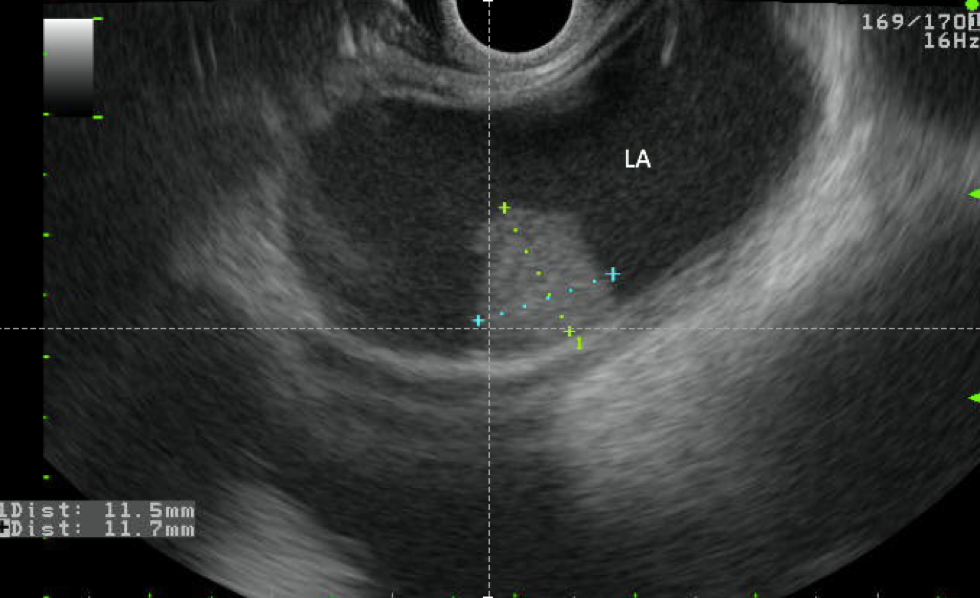 The patient was immediately admitted for further investigations. The transesophageal echocardiography confirmed the presence of a small mass of the auricular septum and excluded thrombi or cardiac failure. There were no changes on chest and abdominal CT scan. At this point, the most plausible diagnosis was a cardiac myxoma, although the presence of a cardiac breast cancer metastasis could not be excluded, given the patient´s history. The following week, she underwent complete surgical resection of the tumor (Figure 2), with a confirming histology of cardiac myxoma. The post-operatory recovery was uneventful.

Commentary
Primary tumors of the heart are extremely rare, with a prevalence between 0.001% and 0.28% in post-mortem reports and nearly half of them are cardiac myxomas. These are benign tumors that can manifest with cardiac obstructive symptoms (chest pain, dyspnea, pulmonary oedema or syncope), systemic embolism or constitutional symptoms (fever, weight loss, myalgia, arthralgia). Nearly one fifth of the patients are asymptomatic at diagnosis. Surgical removal is imperative due to the elevated risk of sudden death in these patients

The heart can be metastasized by any malignant tumor. The incidence of cardiac metastases reported in literature is variable, ranging between 2.3% and 18.3%. Primary mediastinal, lung, breast, oesophageal tumors and melanoma present the highest rates of distal cardiac spread. In one case, cardiac breast cancer metastasis presented with heart failure 27 years after mastectomy.

As the number of EUS procedures rises, gastroenterologists will be expected to identify more incidental findings in organs or structures contiguous to the GI tract that could have an impact on patient´s management and prognosis. Therefore, it is important for the echoendoscopists to be aware of the possible anatomical changes beyond the GI tract and systematically scan these structures, irrespective of the indication for the exam.