Case Report
An 81-years-old female presented to our department with obstructive jaundice (dark urine, pale stools) and a non-specific clinical picture of nausea and appetite loss. Laboratory tests demonstrated a mild leukocytosis with neutrophilia (13.000 cell/mm3; 86%), conjugated hyperbilirrubinemia (7.7 mg/dL), increased aspartate aminotransferase and alanine aminotransferase (10xULN and 8xULN, respectively), slightly increased alkaline phosphatase (2xULN), increased lactate dehydrogenase (10xULN) and serum lipase (3xULN). CA 19.9 was 342 U/mL (Ref value < 37 U/mL). On physical examination, there was no evidence of peripheral lymphadenopathy or hepatosplenomegaly.
Abdominal ultrasound (Figure 1-A) revealed a diffuse enlargement of the pancreatic gland. The pancreatic parenchyma was hipoechoic and surrounded by an enhanced peripancreatic fat layer. Also the extra-hepatic and intra-hepatic bile ducts were dilated. The examiner did not notice any dilation of the main pancreatic duct. Contrast-enhanced abdominal computerized tomography (CT, Figure 1-B) revealed a marked homogeneous enlargement of the pancreas. The cephalic portion measured 7cm (antero-posterior diameter), more marked in the uncinate process, without any clear well-defined mass/lesion. There was a dilation of the extra-hepatic and intra-hepatic bile ducts. There was a moderate amount of ascites, especially peri-hepatic, peri-splenic, peri-pancreatic and in the parieto-colic gutter. In addition, there was a significant edema of the subcutaneous tissue of the abdominal wall and, bilaterally pleural effusions were noted. Endoscopic ultrasound (EUS) (Figure 1-C and 1-D) identified an enlarged homogeneous hypoechoic pancreas, without any well-defined lesion, no dilation of the main pancreatic duct, no peripancreatic or celiac enlarged lymph nodes. Using a 19C EchoTip Pro-Core@ HD Ultrasound Biopsy Needle (Cook Medical), a fine-needle biopsy (FNB) through the isthmus was obtained (2 passes). Ascitic fluid was also collected. 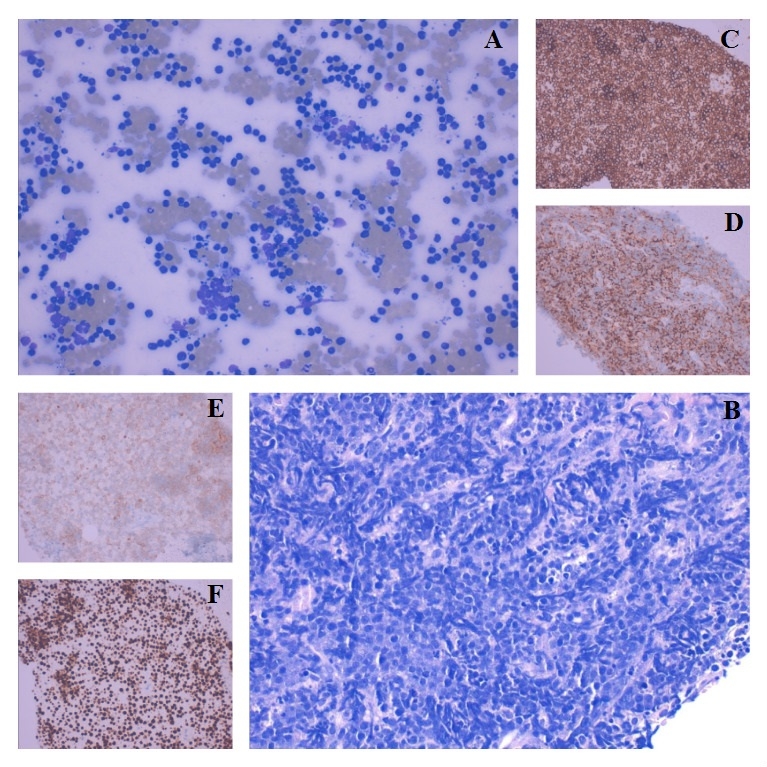 Commentary
Primary pancreatic lymphoma is a remarkably rare tumor of the pancreas, representing approximately 0.5% of all pancreatic neoplasms and <2% of all lymphomas.1,2 A correct diagnosis is crucial because therapeutic management differs from other pancreatic tumors, as pancreatic ductal adenocarcinoma, neuroendocrine tumor and metastases.2 In the presented case, because of the marked homogeneous enlargement of the pancreas, differential diagnosis should also include benign entities that present with a diffuse bulkiness of the pancreas as autoimmune pancreatitis or other rare forms of diffuse infiltrative adenocarcinomas.
Primary pancreatic lymphoma is usually seen in the 5th or 6th decade of life and the most common histological subtype is diffuse large B cell lymphoma, accounting for 80% of all lymphomas.1,2 Two morphologic patterns of PPL are recognised1, a more frequent focal form (occurs in the pancreatic head in 80% of cases) and a rarer diffuse form (infiltrative, leading to glandular enlargement and poor definition, features that can simulate the appearance of acute/autoimmune pancreatitis) – as depicted in our case.3 EUS-FNA or FNB remains the method of choice for the diagnosis of neoplasms of the pancreas.