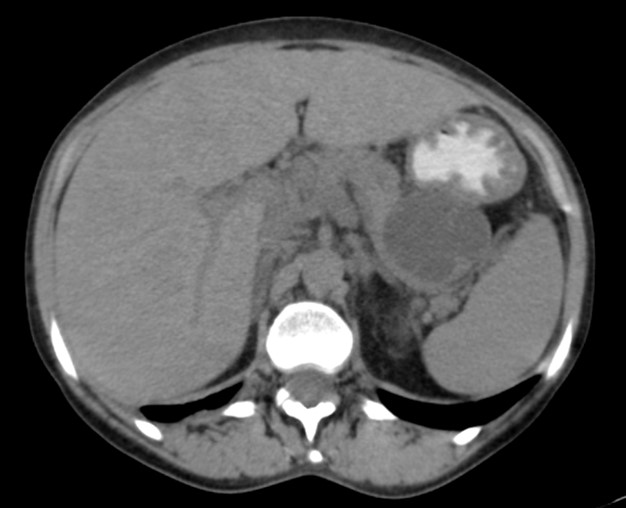 Endoscopic ultrasonography (EUS) confirmed the presence of multiple oblong and echogenic lymphadenopathies in the celiac area, left gastric station and hepatic hilum, the larger with 22mm (Figures 2a and 2b). 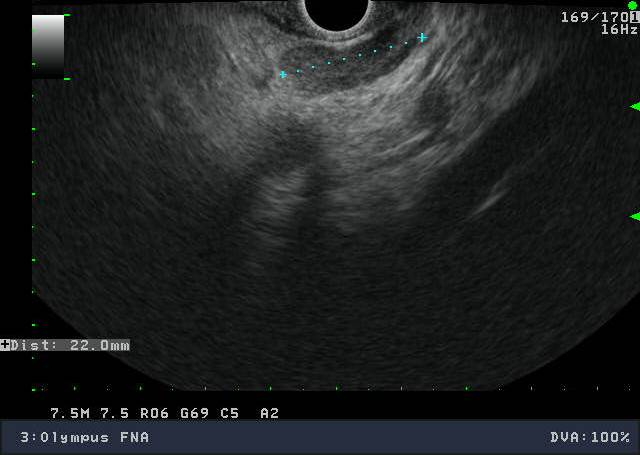 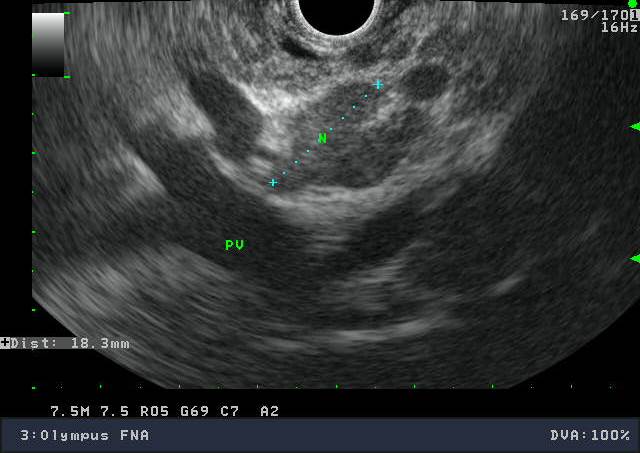 Figure 2. EUS: oblong and echogenic lymphadenopathies in the celiac area (Fig 2a, upper) and hepatic hilum (Fig 2b, bottom).

FNA (with a 22G needle) of the lymphadenopathies in the celiac area was performed and histologic examination revealed apple-green birefringence in polarized light after congo red staining, consistent with amyloid deposit (Figure 3).

In the pancreatic tail a 46 mm multiloculated, septated cyst, with a thicken septum of 7mm, without any communication with the main pancreatic duct (MPD), suggestive of mucinous cystadenoma (Figures 4a and b). Pancreatic cyst FNA (with a 22G needle) was also performed. Cystic fluid cytology and biochemistry analysis were consistent with mucinous cystadenoma (CEA level 6165 ng/dL; amylase 21 U/L). 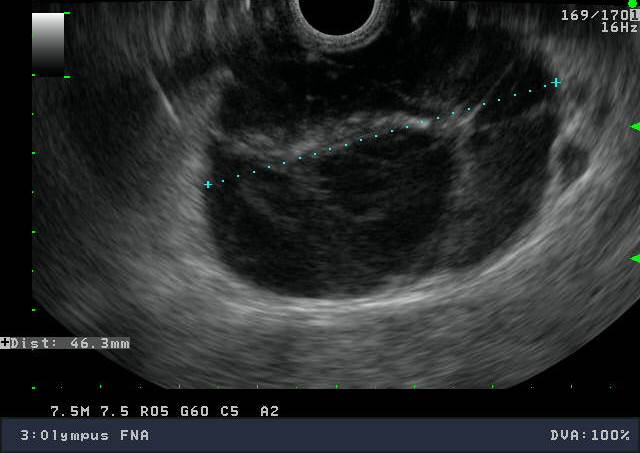 Figure 4. EUS: In the pancreatic tail, a 46mm multiloculated septated cyst (Fig 4a, upper), with a thicken septum of 7mm (Fig 4b, bottom), suggestive of mucinous cystadenoma.

Further investigation revealed that serum free light chain lambda concentration was markedly increased, and bence jones proteins were positive in 24h urine test. Monoclonal Plasma cells infiltration was visualized in morphological analysis of the bone marrow, suggestive of lymphoplasmacytic neoplasm. Due to dismal prognosis of this condition, no further intervention was performed to treat the pancreatic cyst. The patient was referred to the Hematology Unit.

Commentary:
Amyloidosis refers to extracellular tissue deposition of fibrils composed of low molecular weight subunits of a variety of proteins. Immunoglobulin light chain (AL) amyloidosis, or primary amyloidosis, is a plasma cell dyscrasia resulting in abnormal extracellular deposition of fibrillary protein which can occur in association with multiple myeloma or, much less often, Waldenström’s macroglobulinemia or non-Hodgkin lymphoma1,2. The type of precursor protein, the tissue distribution, and the amount of amyloid deposition largely determine the clinical manifestations1,2. Typically, the major sites of clinically important amyloid deposition are the kidneys, heart and liver but other visceral organs may be involved, including the mesentery and retroperitoneal space. Prior reports of EUS for the diagnosis of amyloidosis are limited, referring mainly to gastric and duodenal wall deposition3 and pancreatic involvement4. This case points out the potential role of EUS-FNA in the characterization and cytologic diagnosis of extraluminal amyloid deposits, in this case lymph node involvement, even in the absence of clinical evidence for amyloidosis or myeloma.