An 81 year-old anticoagulated male patient, with a medical history of atrial fibrillation and valvular cardiomyopathy, performed a total colonoscopy due to intermittent hematochezia, which revealed in the distal rectum a well-defined and regular protruded sessile lesion with 16 mm (T0 Is) (Figure 1). Biopsies showed a well differentiated neuroendocrine tumor (NET). 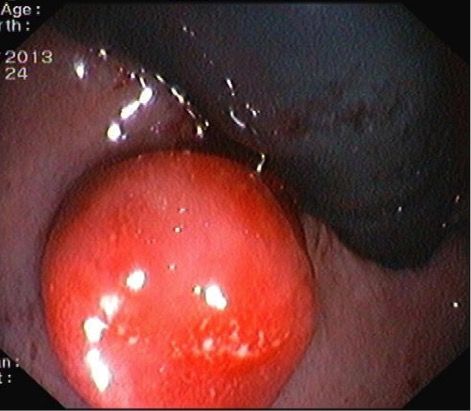 Figure 1: Protruded sessile lesion (T0 Is) with 16 mm, in the distal rectum.

Abdomino-pelvic computerized tomography (CT) and Octreoscan® showed no distant metastasis. Multidisciplinary evaluation was carried out and excision of the tumor by endoscopic submucosal dissection (ESD) was planned. The procedure was performed with no complications reported (Figure 3: A to F). 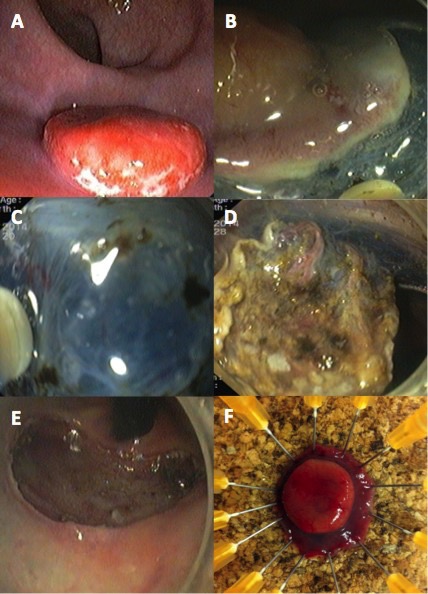 Pathological analysis confirmed the diagnosis of a totally resected well differentiated neuroendocrine tumor (G1) with a low mitotic index (Ki67 < 2%) and no lymphovascular invasion. No distant metastasis were identified during the follow up period (2 years).

The incidence of rectal neuroendocrine tumors has been rising largely due to an increased number of screening colonoscopies, allowing for identification of smaller lesions amenable to endoscopic treatment1. Indeed, endoscopic therapy of neuroendocrine tumours may be considered in lesions below 2 cm, without muscularis invasion according to the European Neuroendocrine Tumor Society 2012 consensus guidelines2. However, the incidence of metastasis of rectal carcinoid tumors increases when they are larger than 10 mm, have muscular invasion, poorly differentiated histology, and lymphatic or vascular involvement. Therefore, EUS has shown to be useful during preoperative evolution for measuring the size and depth of rectal carcinoid tumors. Moreover, EUS is not considered technically difficult in this setting as the endoscope is easily maneuvered in the rectum3.