A seventy-seven year-old male was admitted for haematemesis and acute anemia. His past medical history was relevant for chronic myeloid leukemia, for which he underwent chemotherapy, as well as 5 episodes of upper gastrointestinal (UGI) bleeding during the three previous years, for which urgent EGD had been performed. Endoscopic bleeding stigmata was identified in only 2 of these episodes: an erosion with an adherent clot at the upper gastric body. After haemodynamic stabilization the patient underwent UGI endoscopy and, again, an erosion with an adherent clot was found at the lesser curvature of the upper gastric body. The recurrent nature and the dissociation between endoscopy and massive UGI bleeding brought the hypothesis of a Dieulafoy’s lesion. Endoscopic therapy consisted of adrenaline injection and clipping.

Endoscopic ultrasonography (EUS) was performed a month later to confirm vessel obliteration. At endoscopy there were no mucosal abnormalities but EUS evaluation revealed a 2 mm submucosal vessel with pulsatile flow at the gastric location previously described. This was consistent with a Dieulafoy’s lesion (Figures 1A and 1B). 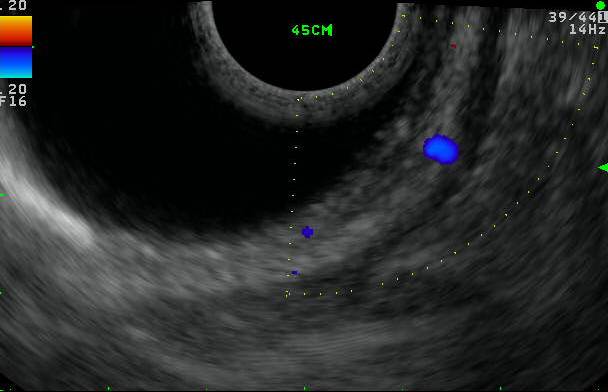 This resulted in gastric wall expansion at the expense of the submucosal layer and subsequent Doppler evaluation confirmed vessel obliteration (Figure 3). 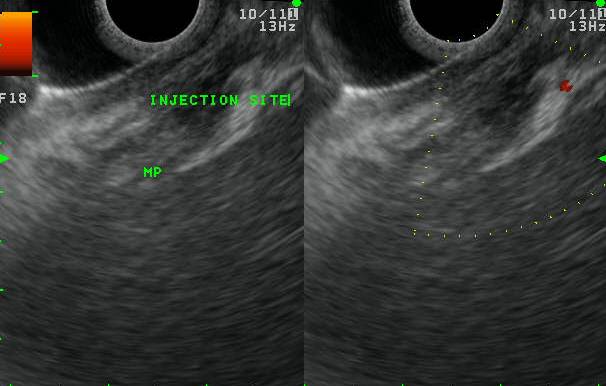 At 4 months of follow-up there has been no bleeding recurrence.

Dieulafoy’s vascular malformation is a congenital anomaly in which a large caliber artery resides close to the mucosal surface. Endoscopic treatment is usually successful during the acute event, but rates of recurrent bleeding can be as high as 15% (1). In fact, there is no secure method for assuring that blood flow in the feeding artery has been effectively terminated in response to endoscopic therapy. However, with the introduction of Doppler EUS, highly detailed imaging of the gut wall layers, mucosal vascular anatomy, and blood flow can be obtained. EUS-guided treatments were first reported in 1993 and have proved useful in this setting (2,3). This technique should be considered in cases of recurrent bleeding.