A 54 years old woman was admitted to our hospital for a hemangioma spleen. During follow-up abdominal ultrasound, a pre-sacral nodule with 24mm, adjacent to the posterior wall of the rectum and without invasion of adjacent structures, was identified. The patient had no symptoms. Tumor markers including CEA, CA 19.9, were in normal range. CT scan confirmed the presence of a round solid homogeneous pre-rectal mass (Figure 1) 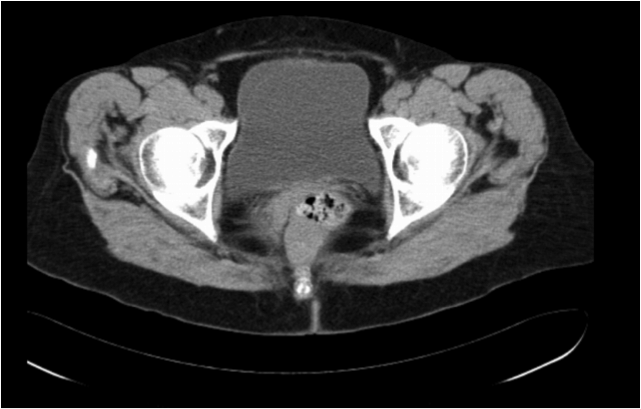 Endoanal ultrassound demonstrated a nodular lesion with 24mm outside the rectal wall with mixed characteristics: echogenic with a homogeneous content (Figure 2). Elastography ultrasound of the lesion show the typical appearance (blue, green, red) of a cyst (Figure 3). Endoscopic ultrasound-guided fine-needle aspiration was performed. The histology was compatible with an epidermoid cyst. The patients remains asymptomatic and in surveillance, without any treatment. 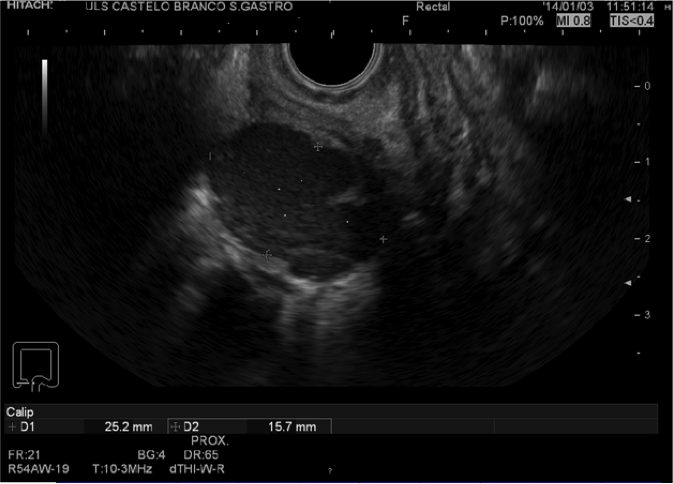 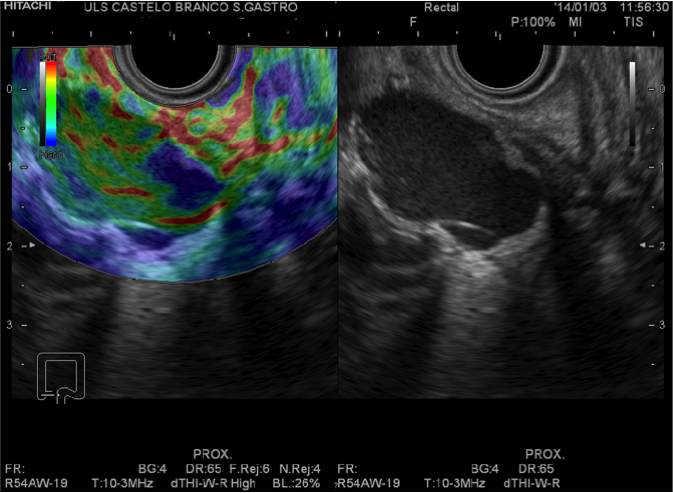 Tumors occurring in the retro-rectal (pre-sacral) space are rare. The retro-rectal space contains multiple embryologic remnants derived from a variety of tissues and tumors that develop in this space are histologically heterogeneous. These lesions include both benign cystic and malignant lesions and are usually classified as congenital, inflammatory, neurogenic, os¬seous, or miscellaneous1. Developmental cysts constitute the ma¬jority of congenital lesions and may arise from any of the germ cell layers. They comprise approximately two-thirds of retro-rectal tumors and are more common in woman2. Developmental cysts include mucus-secreting cysts, dermoid and epidermoid cysts and teratoma3. Epidermoid cysts are benign lesions that are lined with squamous epithelium; they are typically benign unilocular lesions that do not contain skin appendages (sweat glands, hair follicles, sebaceous cysts), unlike dermoid cysts. In most cases, epidermoid cysts are assymptomatic and are usually found incidentally while performing a pelvic or rectal examination or while doing a pelvic ultrassonography or CT/MRI. The symptoms are non-specific and can be attributed to compression or invasion of pelvic viscera or nerves4. CT and MRI are the imaging modalities of choice in diagnosing retro-rectal tumors. Utrassound endoscopy or anorectal ultrassonography can be used to evaluate whether the lesion is cystic or solid and if there is rectal involvement5. Due to its high resolution, ultrassound endoscopy or anorectal ultrassonography can be superior to other imaging modalities for the evaluation of retro-rectal tumors, with the advantage of allowing the obtention of material for histological analysis. Ultrasound elastography is used as a complementary modality to improve its characterization. There are no reports in the literature that evaluate the utility of elastography in the classification of retro-rectal tumors. However, elastography can substantially improve ultrasound capability and can be useful in differentiating benign from malignant retro-rectal tumors. Historically, the role of biopsy of retro-rectal tumors has been controversial5. As advocated by Dozois et al1, preoperative tissue diagnosis is essential for the management of solid and heterogeneous cystic tumors. These authors defend that purely cystic lesions should rarely undergo biopsy because they are usually benign and there is a risk of secondary infection. As there was a disagreement in the features of lesion in CT and endoanal ultrassonography, biopsy was required. Surgical resection is the treatment of choice, even in asymptomatic patients. However, considering the benign features of the lesion and the absence of symptoms, the patient was mantained in surveillance. The authors present a rare case of a retro-rectal epidermoid cyst diagnosed by pelvic ultrassonography, highlighting the ultrassonographic features and the utility of elastography in its evaluation.