A 17 year-old patient was admitted with a 6 week history of lower right quadrant pain, diarrhea and weight loss. He denied blood in his stool, arthralgias or rash. There was no significant past medical or family history. On physical examination, his temperature was 38.1°C. Other vital signs were normal. His abdomen was soft and slightly tender on palpation in the right lower quadrant. Laboratory tests revealed leukocytosis (19.32 10³/µL), mild anemia (11.2 g/dL), a serum ferrum of 12 (normal, 20–50 µg/dL) and a serum albumin of 2.6 (normal, 3.5–5 g/dL). Serologic testing for HIV, Yersinia and E. histolytica were negative. Microbiologic stool tests were negative. Abdominal ultrasound showed bowel wall thickening and alterations of bowel wall echopattern envolving the terminal ileum and proximal colon, increased vascularity assessed by power-Doppler US (Figure 1) and enlarged mesenteric lymph nodes (Figure 2). 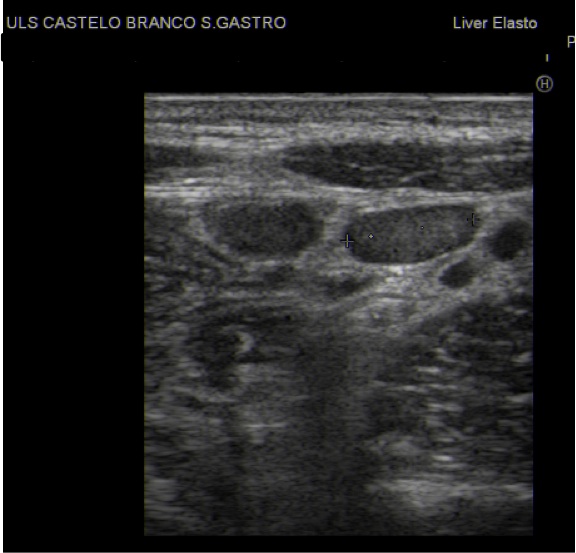 The rest of colon and rectum had normal appearing mucosa. Multiple biopsies were obtained from all segments. Histology showed chronic inflammatory changes and noncaseating epithelioid granulomas, a pattern consistent with Crohn’s disease. 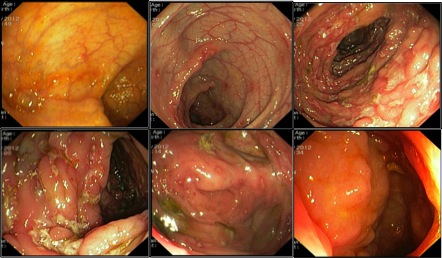 Improvements of technology and increasing experience with sonographic findings in a variety of intestinal diseases, including inflammatory bowel disease (IBD), have contributed to firmly establish the role of ultrasound as a clinically important, non-invasive and widely available imaging modality. Transabdominal ultrasound is clinically useful in detecting Crohn’s disease (initial diagnosis), by evaluating bowel wall thickness and surrounding structures, including periintestinal inflammatory reaction, extent and localization of involved bowel segments and detection of luminal or extra-luminal complications, such as fistula, abscesses, carcinoma and ileus 1,2. The most frequent abnormalities of bowel wall in CD include thickening, alterations in the echopattern, increase in power-Doppler signal, loss of elasticity and peristalsis. Extra-intestinal abdominal US changes can include fibrolipomatous proliferation of the mesenteric fat (creeping fat) and enlarged mesenteric lymph nodes 1,2.